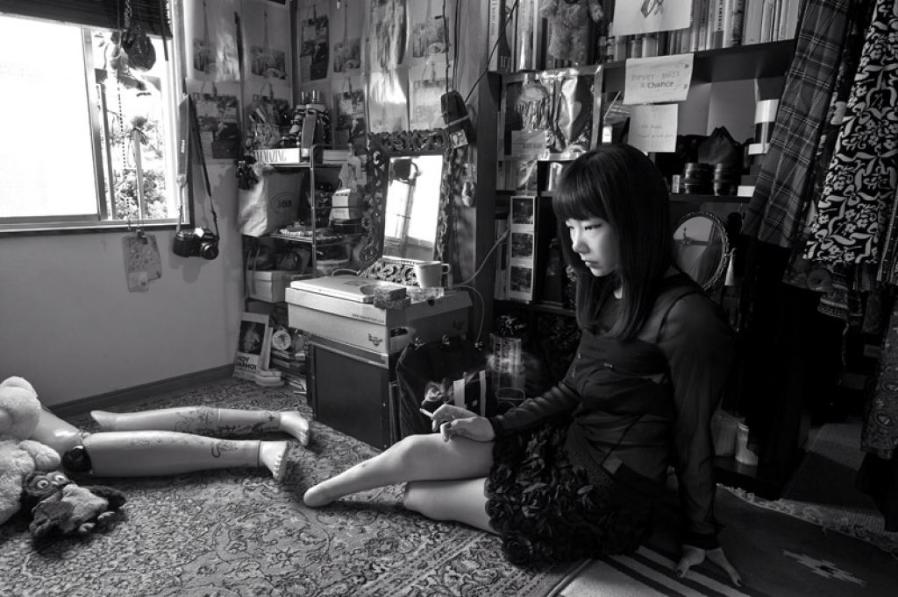 Mari Katayama
To be unique, to be normal.

While many wish to be unique, being common people has always been the hope of artist Mari Katayama. Ever since childhood, Katayama has always desired for a usual pair of hands and legs. Standing and walking in a usual posture was to her an unattainable luxury.

Mari Katayama was born 29 years ago lacking shinbones. This made her legs seriously bow inwards, and her left hand bears only two fingers. She was heavily bullied because of her uncommon appearance. Orthoses were always attached to the legs of her tiny body, but her walking posture was still far from being normal. Not only was the little Katayama frustrated by her awkward posture, she was as well upset for not being able to slip on a pair of elegant high heels. When she was given the option of amputation at the age of nine, without a second thought she accepted the idea of replacing her clubfeet with prosthetics.

After bidding her legs farewell for 20 years, memory of having the clubfeet is fresh as yesterday. Sometimes she recalls the feeling of standing on her own bowed feet, or even has an illusionary itch on her long-gone feet. She only vividly remembers her body is supported by a pair of sturdy but bloodless prosthetics when she tries to give a good scratch to the illusionary itch. How would life be like if she was still with her clubfeet? This curiosity prompted Katayama to reproduce how she imagines her legs would be like. She attached those legs to her thighs with atrophied muscles, and created a series of self-portrait.

In her 2013 photography series “Smoking Area”, Katayama pictured herself lying naked in bed, or sitting between piles of cartons with her legs stretching out. In some pictures she sits on the floor and her prosthetics are laid randomly near her in a messy room, she sometimes even puts socks on her prosthetics. One thing in common among all pictures is that Katayama is always smoking in her self-portraits. Her self-portrait series look so real that many audiences believe that is Katayama in real life, and thought Katayama entirely exposed her true self under camera lens. The living space as shown by the pictures is however carefully arranged backdrop. She was in fact acting as herself inside of this hyperreal constructed space.

“‘Miss Katayama is a hardworking person. Regardless of the pain she has from her prosthetics and the agony from being bullied, Katayama never gives up.” This is what the outside world imagines me to be. I might have a more difficult life when compared to the normal ones, but to me, it is my undeniable fate after all. I don’t want to act like “life is very hard”.’ Katayama once said in an interview that she felt being increasingly misunderstood by the audience along with the growing fame. She was in turn affected by this false expectation and pretended to be strong and tough. The Mari Katayama as seen by the public is in fact a character carefully constructed by her, so as to keep the actual Katayama in a safe realm not to be gazed at.

“Performing roles designed by oneself is perhaps what everyone has been doing. People just put on different faces when being at work, being at home or being with friends.” Which one is the real face then? In Katayama’s art installation “You’re Mine” in 2015, she demonstrated three faces of “self” to the audience: a plaster figure, a self-portrait, and a full-length mirror. The plaster figure is a life-size close replica of Katayama’s physical self, even to details as minute as finger prints. The face of the figure is however a mirror, it becomes a different person as soon as anyone looks into the mirror. Katayama with heavy make-up sits in a self-conscious posture in the self-portrait; this is like a collage of faces of many people, a patched up “superficial self”. The last one that features the self in the full-length mirror is perhaps the one closest to reality, a mere reflection that is not artificially altered. The idea of “reality” is however more abstract than a real/unreal distinction, because every face is in fact part of the person’s reality.

Since childhood Mari Katayama has tried very hard imitating others, disguising so as to live up to others’ expectation — the effort she put in being normal gave her enormous pain. It was only until recent years that she realized constructing oneself into a desirable person is indeed one of the most common behaviour. “To survive in this society, one has to learn from others how to behave in different occasion, all the dos and don’ts of social interactions are knowledge we gained by observing others. We all construct a ‘self’ using this knowledge, in this regard, I am as normal as anyone is.”